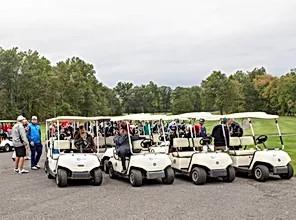 They say facts are stubborn things. (Or they used to, at least.) But over the past 89 years, so many phenomenal tales have emerged from the Masters Tournament and its host course that separating what is true from what is lore can be harder than landing a day pass to Berckmans Place. What follows are 100 certifiable facts about the world’s greatest sporting event (except maybe the bit about the curse at Amen Corner).

1. In 1931, Augusta National cofounders Clifford Roberts and Bobby Jones bought the property on which the course is built for $70,000.

2. Roberts was a single-digit handicapper.

4. On the course, Jones kept a four-leaf-clover medallion attached to his pocket-watch chain.

5. When the Masters was first played, the club had 76 members.

6. Magnolia Lane was a gravel road when Augusta National opened. It was paved in 1947.

8. It is lined, spectacularly, with 61 magnolia trees.

9. In the early days of the club, Roberts and Jones had hoped to host the U.S. Open, but they were turned down.

10. On March 22, 1934, at 9:45 a.m., journeyman Ralph Stonehouse was the first player ever to tee off in a Masters Tournament (then called the Augusta National Invitational).

12. Horton Smith won that first Masters with a final score of 284.

13. Jones came out of retirement to compete in the inaugural event and finished 10 strokes back, tied for 13th.

17. Jones witnessed it. So did Walter Hagen and Byron Nelson.

18. Sarazen won that event the next day in a playoff.

20. Before the start of the Masters in 1955, each player in the field went to the 15th to see if they could duplicate Sarazen’s double eagle. Nobody did, but Freddie Haas Jr. was the winner, hitting his second shot to just four feet.

24. Hogan, preternaturally gifted like so many Masters champions, turned pro at the tender age of 17.

28. Bob Goalby, green-jacketed in ’68, earned 11 letters in high school and earned a football scholarship to the University of Illinois.

29. Snead was the first Masters champ to receive a green jacket, which debuted in 1949.

33. Each year’s Masters winner takes home his green jacket, but only for 12 months. Thereafter, the “club coat” stays on Augusta National property.

39. He is one of just three players — with Nicklaus and Nick Faldo — to have won in consecutive years.

40. For each of his back-to-back wins, Woods served up porterhouse steaks at the Champions Dinner.

52. If Sluman were looking closely, he’d have seen the only palm tree on the course — by the 4th green.

56. In 1980, Tom Weiskopf made a record 13 on that same hole, the highest score over par on any hole in Masters history.

57. In his book The Story of Augusta National Golf Club, Clifford Roberts claims that during construction of the course they found an Indian burial ground in the area of the 12th green. This might explain No. 56.

61. Seven people have posted an 8 on the par-4 finishing hole.

67. Tommy Aaron, the ’73 winner, was the first Masters champion to wear eye-glasses. Vijay Singh wore specs and won in 2000.

68. Aaron’s final-round playing partner, Johnny Miller, wrote down the wrong score on Aaron’s card. Aaron caught the mistake before he signed it.

69. In 1961, two-time PGA Tour winner Jim Turnesa missed the cut because he incorrectly signed for a higher score.

70. In 1952, Aussie pro Norman Von Nida flew 50 hours from Australia to compete in the Masters. His 27th-place finish didn’t cover the cost of his airfare.

78. At Augusta National, there are three bridges named after Masters winners: Hogan (on the 12th), Nelson (on the 13th) and Sarazen (on the 15th).

79. At the 1971 Masters, Clifford Roberts suggested that Ben Crenshaw get a haircut — and he did.

81. His ashes are buried there. No one will say where.

82. Bobby Jones is the president of Augusta National in perpetuity.

83. The first year players were allowed to bring their own caddies was 1983.

84. In 1983, 18-year-old college student Liz Archer, on the bag for her father, 1969 Masters champion George Archer, became the first female caddie at the Masters Tournament.

85. In 1990, working Nick Faldo’s bag, Fanny Sunesson became the first and only female caddie to win at the Masters.

86. In 1953, Augusta National built the Eisenhower Cabin for President Dwight D. Eisenhower, who took office in January of that year.

87. The cabin was designed, in part, by the Secret Service.

89. The iconic Eisenhower Tree, a century-plus-old loblolly pine that guarded the 17th hole’s left fairway, was removed in 2014 after suffering damage in an ice storm. To date, it has not been replaced.

90. In 1981, the Augusta National greens were switched from bermuda grass to bentgrass.

92. Just past the 11th tee there’s a private outhouse, for players only.

95. The practice area, overhauled in 2010 and considered the greatest in the world, used to be a parking lot for the tournament.

97. For the price of a moderate hotel room, members and guests can stay in one of the 10 cabins on the grounds of Augusta National.

98. Masters winners are welcome to return to Augusta National to play the course with a guest, but they still have to be joined by a member.

99. The initiation fee for members at the impossibly exclusive club is estimated to be an unexpectedly low $40,000.

100. If you don’t receive your bill at the end of the month, you know you are no longer a member.

Join us for our annual 8″ cup tournament, it always is a lot fun. It will be held on Saturday, October… Wait what, 8″ Cup in the Spring at Fox Hollow? That’s right! Carts, food, prizes and lots of FUN are included! If you have never played the hole looks like a bucket, but don’t be fooled we place them in very difficult positions!

It is a standard scramble format with multiple flights based on your handicaps. Stay tuned for more information with date and time. We look forward to seeing you there!